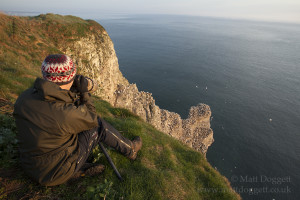 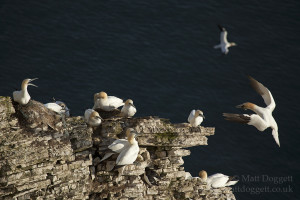 The gannet – one of our largest and best loved seabirds. Reknown for its diving prowess and hungry appetite is for most seen only from the land or a boat. 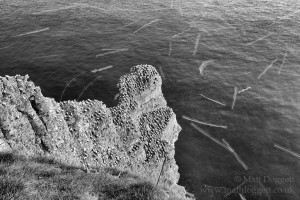 Watching gannets coming and going from a colony you can not help but wonder what life is like out in the feeding grounds. What happens once they have disappeared beneath the waves?

I set out with Richard Shucksmith to try and capture those brief, fleeting moments when they plunge beneath the waves. We weren’t expecting an easy ride. Many had tried to no avail. But in our optimism we invested in several crates of mackerel, one of their favourite food sources and headed out to sea. 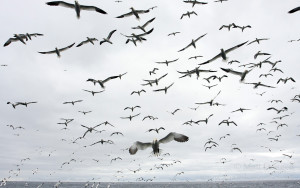 It didn’t take long to attract a lot of gannets to the boat. And we began by trying for some photos above the surface. Very soon we were getting very wet ourselves and took the decision to start with the underwater images. 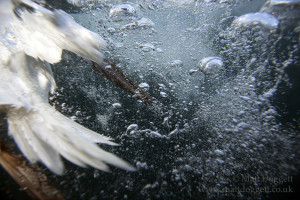 Not wanting to push our luck too far too soon, we began by hanging over the side, holding the cameras just beneath the surface. A diving gannet will hit the water at 80-100 kph. Getting the shots was not easy and a fine collection of half gannet and bubble images ensued. 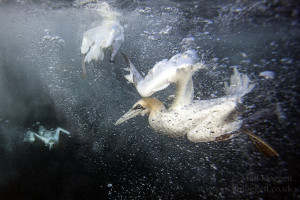 Eventually though we started to time things right, capturing the gannets as they hit the water and raced to get the fish first. 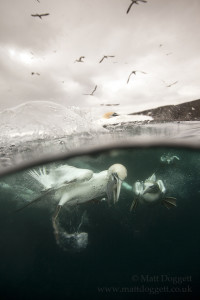 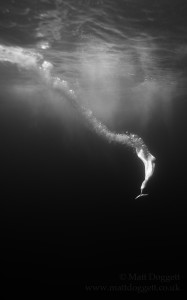 There was some time for a certain amount of creative experimentation but we ran out of fish very quickly; the whole experience lasting only half an hour. Heading back to port we intended to get back as soon as possible but our plans were thwarted by strong winds for several days – time to think about the next set of images and how we were going to get them. 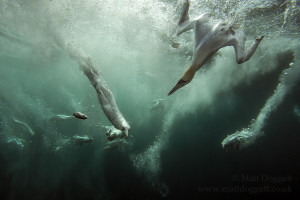 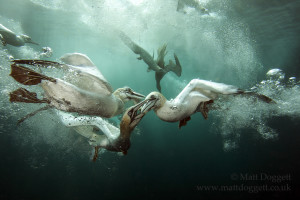 Our second attempt saw us in the water in full dive kit. Such an approach opened up a whole new range of potential angles. 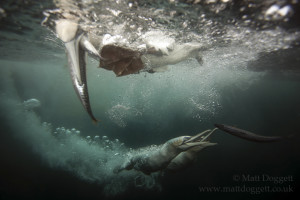 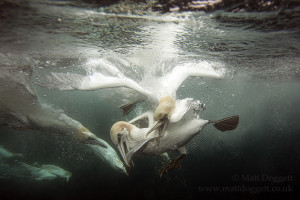 We witnessed behaviours including the gannets swallowing fish before breaking the surface. This reduced their chances of being harassed by great skuas (bonxies) back at the surface. 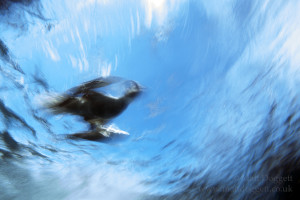 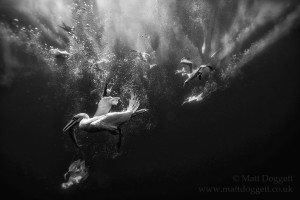 The action was fast and furious. To our surprise they could also swim or “fly” underwater, using their wings to propel themselves at speed into the depths to take the fish. The noise when 20 to 30 gannets hit the water simultaneously was astonishing. 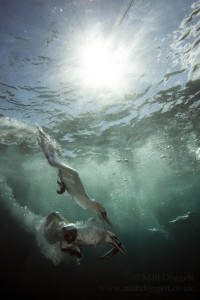 Sometimes the gannets would be so close they were almost touching the camera housing but never once did we feel in danger of a gannet diving into us. Despite the scene it was organised chaos and the gannets had great spatial awareness. We never once saw gannets collide despite chasing after the same fish.

The project gave us a unique perspective on the diving life of a gannet and it still raises the heart beat just thinking about it.