Life never stands still. Animals, plants, even whole ecosystems are constantly changing, adapting to their wider environment.  These changes might be behavioural, occurring over just a few minutes, or they may be generational, taking many years to manifest. The forces driving  change and the rate of change can be complex. As the human species we have learnt much about environmental change and the rate at which it can occur. So when an entire marine community began to disappear at some speed from the seas of Tasmania, scientists took interest. 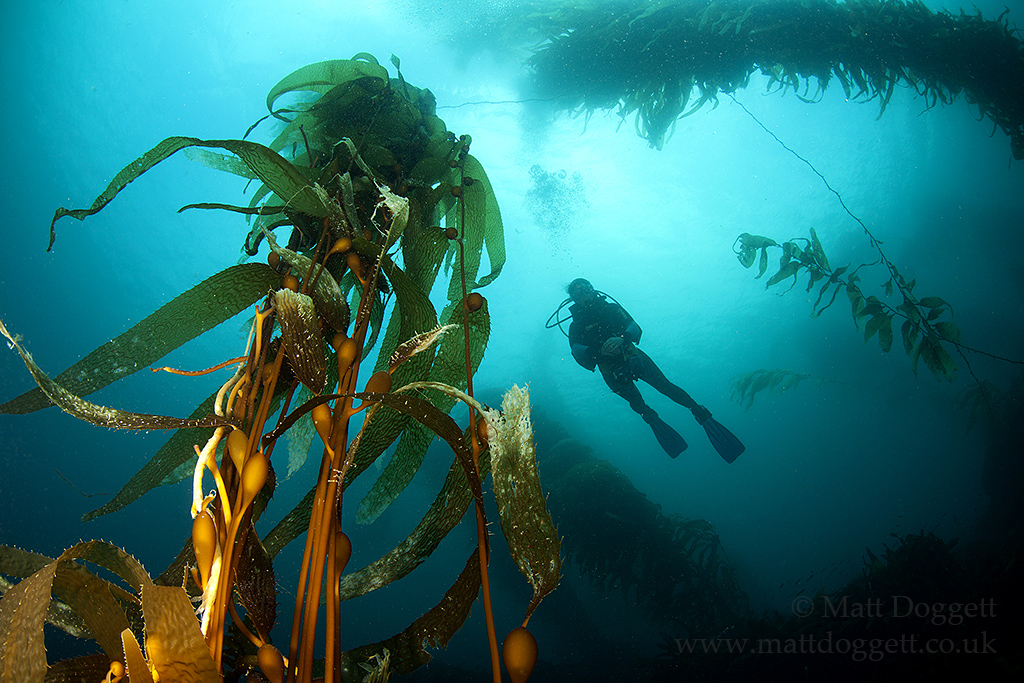 Much of Tasmania’s southern coast line hosted mile after mile of giant kelp forest, Macrocystis pyrifera, as recently as 30 years ago. Like many kelps, these giants benefit from cold waters, growing best over the winter season and creating magnificent underwater forests. 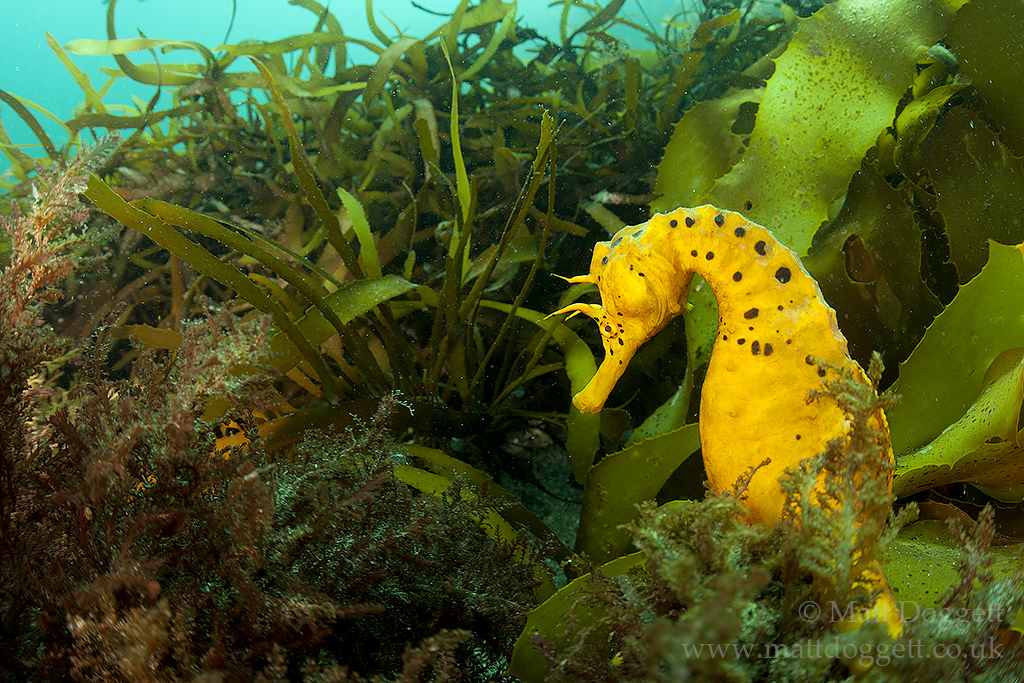 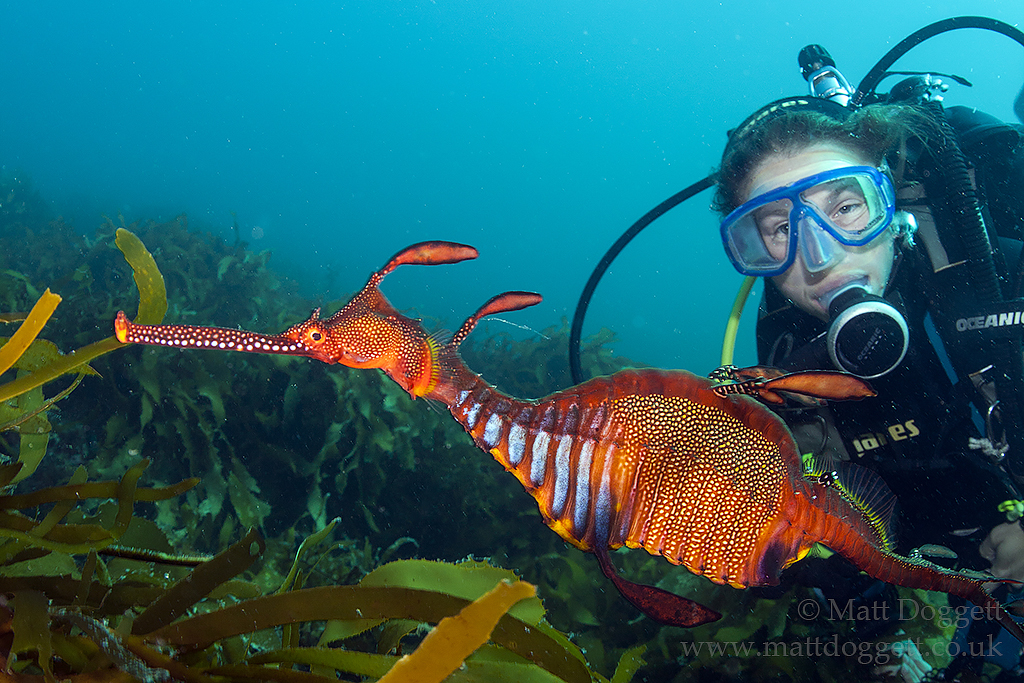 Home to creatures such as the enigmatic weedy sea dragon, Phyllopteryx taeniolatus, and the rare pot-bellied sea horse, Hippocampus abdominalis, the forests also provide important fish nursery habitats for species of commercial importance such as lobsters, snappers and trumpeters. 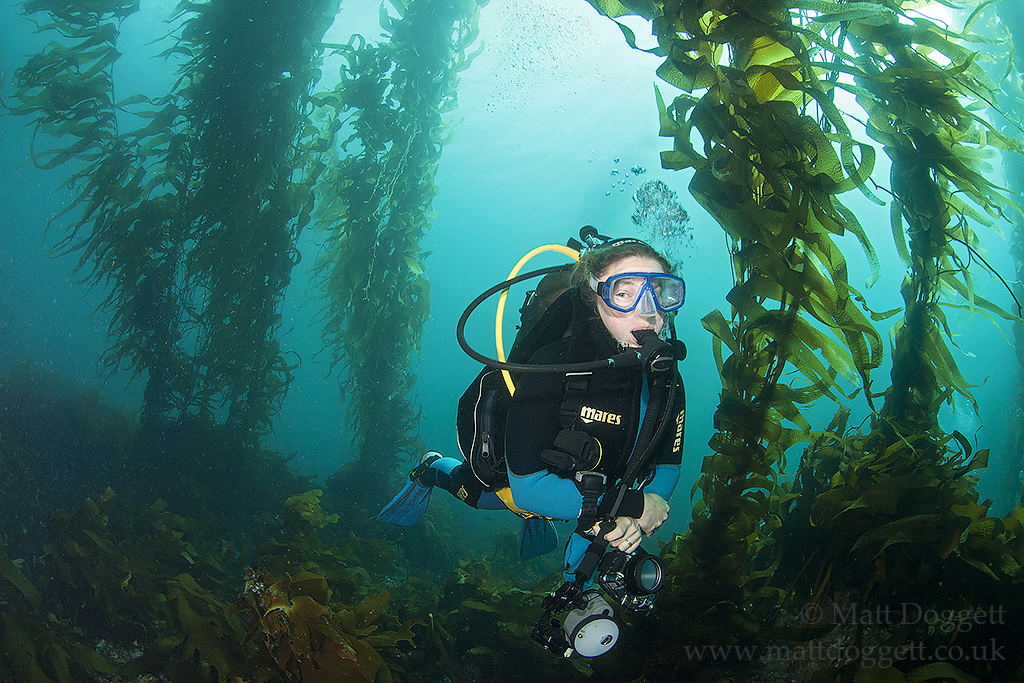 Giant kelp is a draw for tourists from around the world hoping to swim among the towering stands of algal splendour and marvel in awe as shafts of sunlight penetrative the depths and fish and sea lions buzz around them with phenomenal agility. 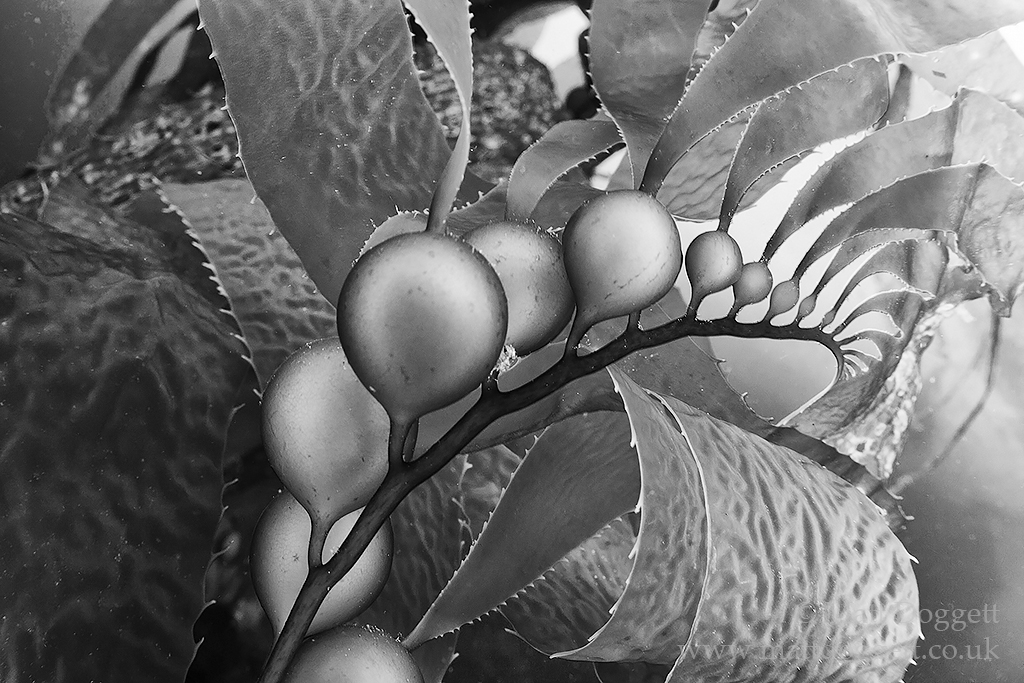 Taking a closer look the plants themselves have even more beauty than one might imagine. The gas bladders which hold them upright in the water column create mesmerising formations; the small vying for attention with the wider scenery.

But the times, they are a changing. The seas around Tasmania have experienced a more rapid rise in temperature than almost anywhere else on earth. An average increase of ca. 1.5 ºC since 1940 has taken the kelp to the limits of its optimal temperature growth range. The East Australian Current (EAC) has encroached further and further south each year, warming the waters and forcing the giant kelp forests from their strongholds; in some areas less than 5% of the kelp remains. 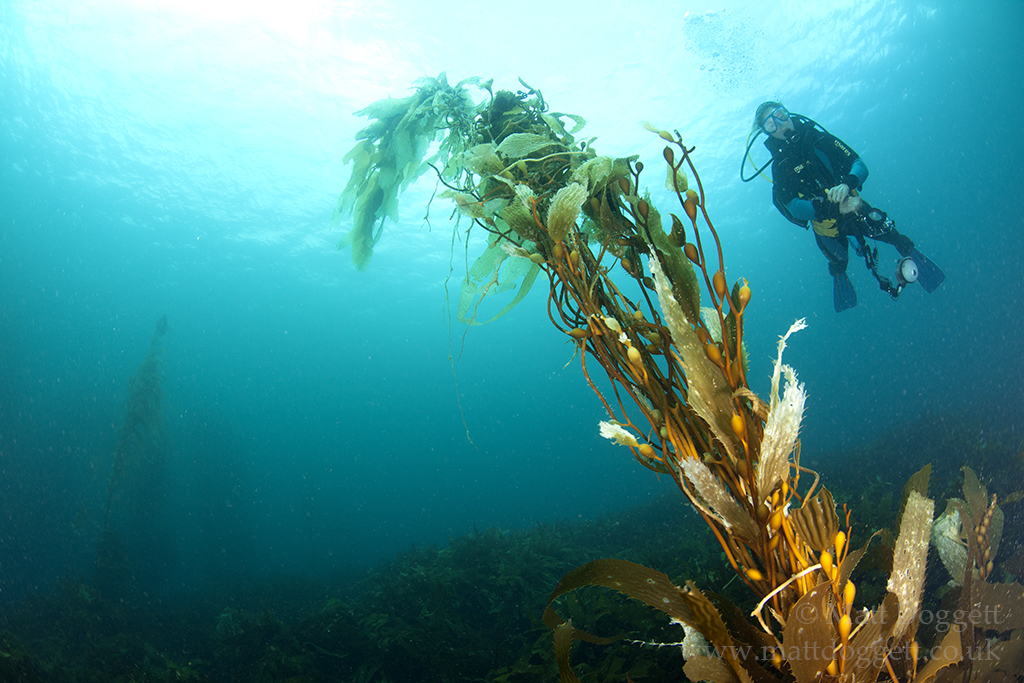 Fortescue Bay on the Tasman Peninsula, southeast of Hobart covers some 3-4 sq km and until recently supported vast acres of giant kelp forest. Now all but a few dozen strands hang on in one tiny patch; a similar fate is being met by the once abundant forests of Bruny Island to the southwest. 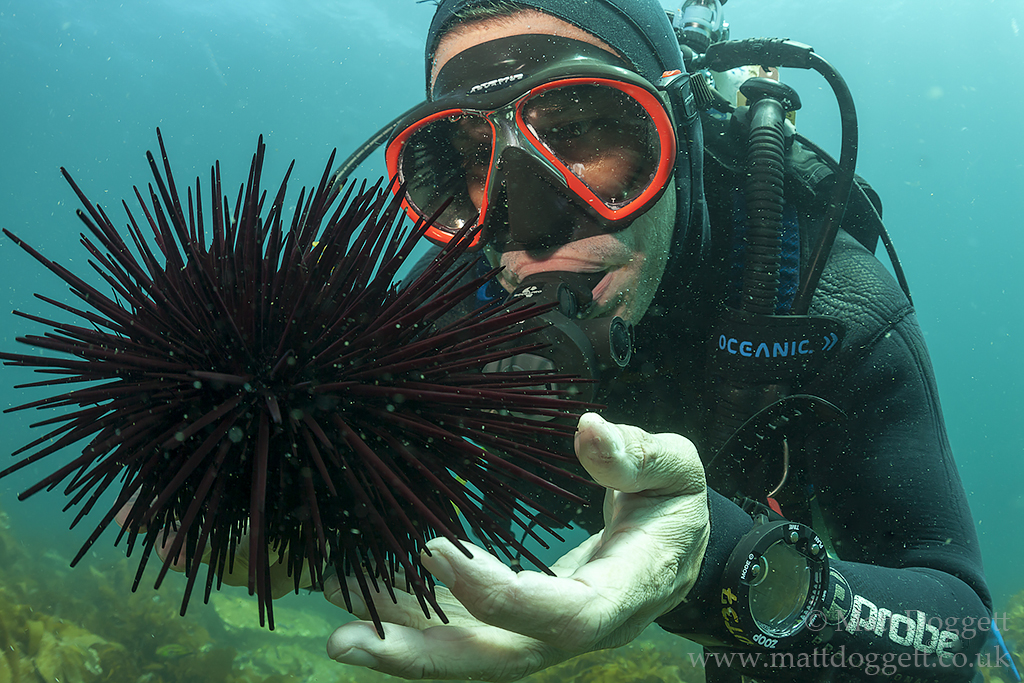 The incessant southward march of the EAC is bringing with it more challenges for the local marine life than just the disappearance of the kelp forests. One of these is a northern, warm water species of sea urchin, Centrostephanus rogersii, which has hitched a ride on the EAC and is no shrinking violet as the new boy in town. 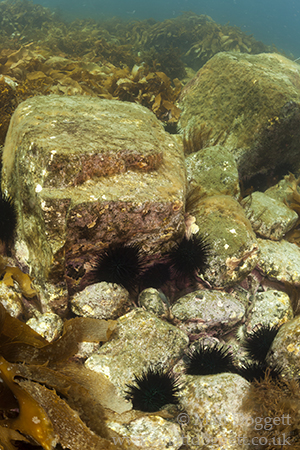 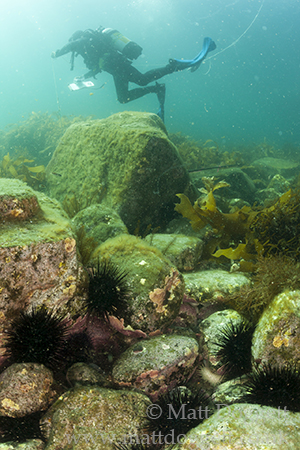 Left unchecked the urchin can graze all the algae from the seabed, creating vast barren areas, low in diversity, unable to support much life. Its natural nemesis, the rock lobster (or crayfish), Jasus edwardsii is seldom seen, over-fished and undervalued for its ecosystem services. 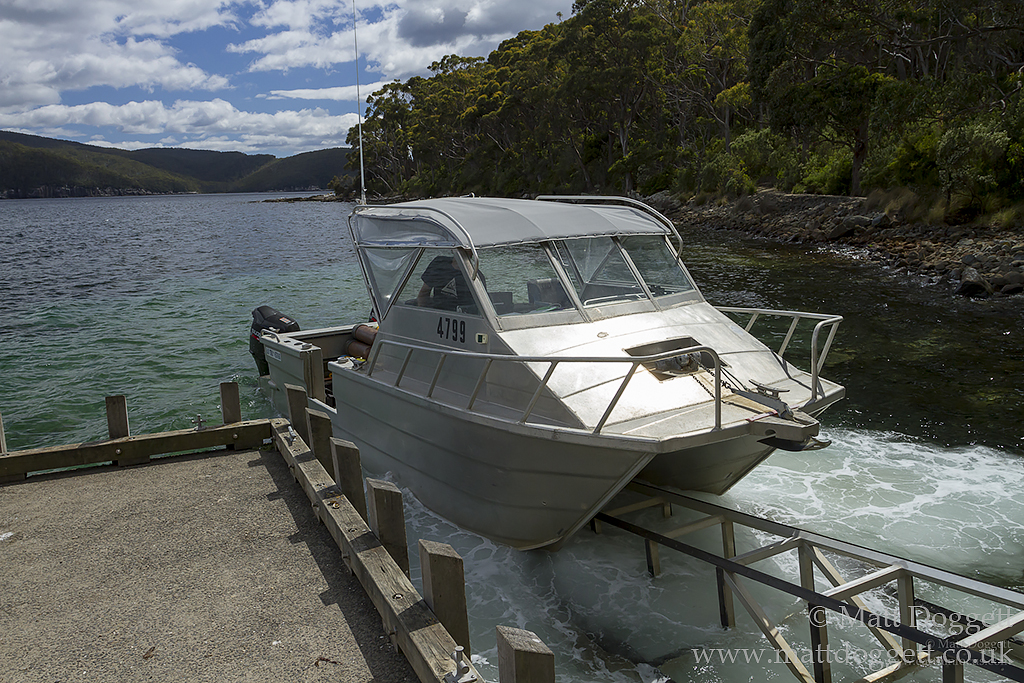 But there is hope. Scientists from the Institute of Marine and Antarctic Studies at the University of Tasmania are studying these changes and experimenting with methods of controlling some of these changes to the marine systems. 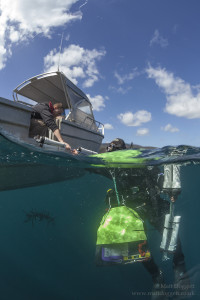 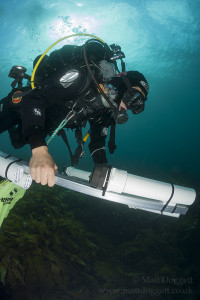 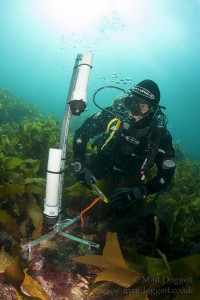 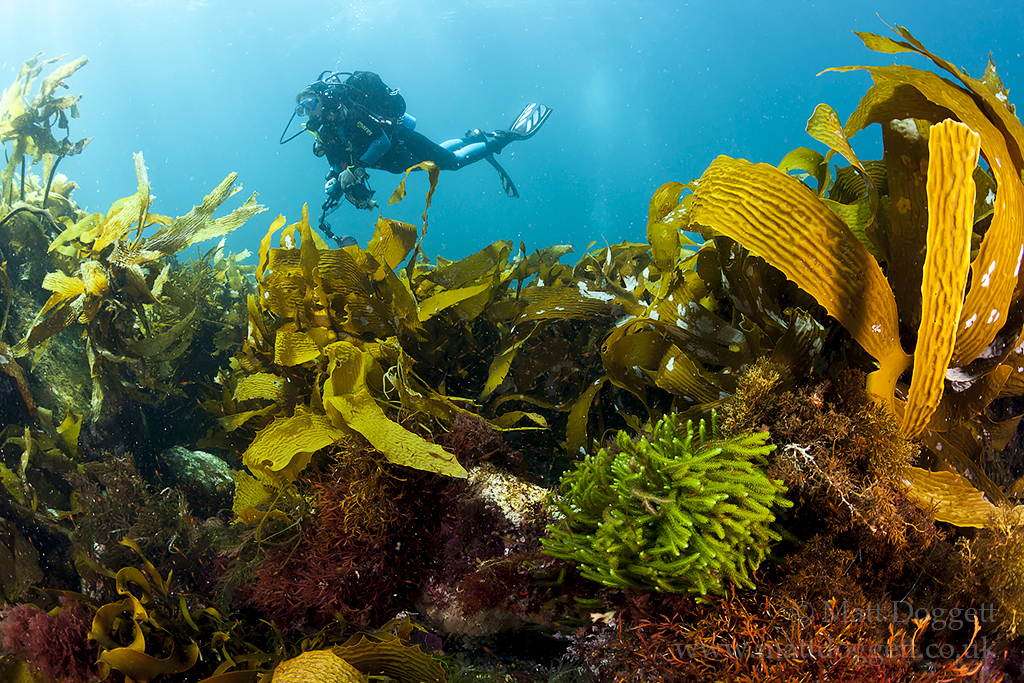 PhD students Masa and Cayne Layton are working on a project to understand the effects of climate change on another kelp species Ecklonia radiata under threat from climate change and the invasive urchins. Experimental areas of reef are stripped of kelp, some just a little, and others left untouched. Light sensors and sediment traps are installed to determine how these different, simulated situations affect the growth and diversity of the diverse reef algae communities. The results can then be used to inform management decisions based on different climate change or invasive species scenarios i.e. from what level of degradation can these communities recover? 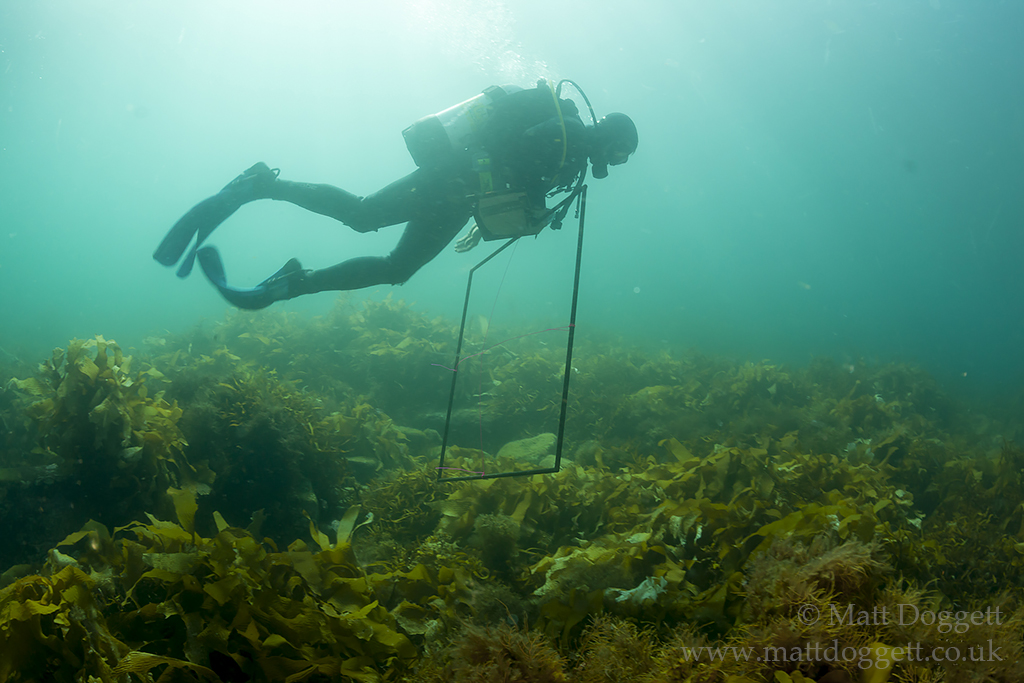 At the same time, Dr Scott Ling has been studying the effects of the errant urchins along the Tasmanian coast. By recording the density of urchins and size of barren areas, he is building an understanding of their population dynamics. 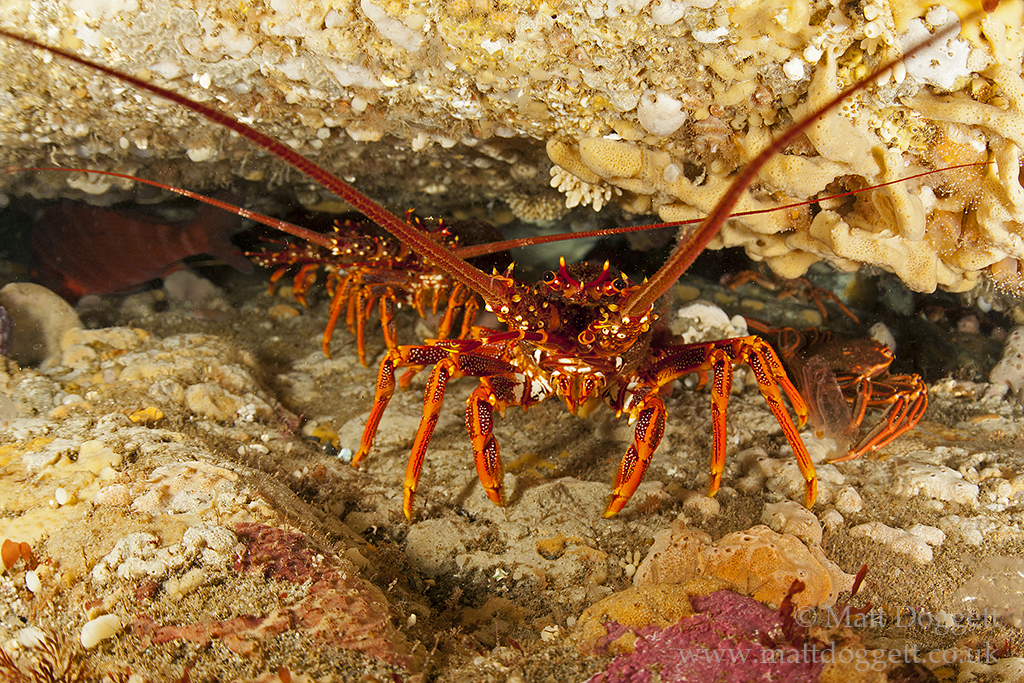 In other areas Scott has worked with local communities and experimented with crayfish re-introductions and closed areas as a means of controlling the urchins populations.  More lobsters meant fewer urchins and fewer barren areas. Scott explained that prevention is much better, cheaper and easier than cure; a natural, functioning ecosystem can actually resist a lot of urchin grazing pressure but once the urchins have altered the nature of an ecosystem, it can be very very difficult to restore. 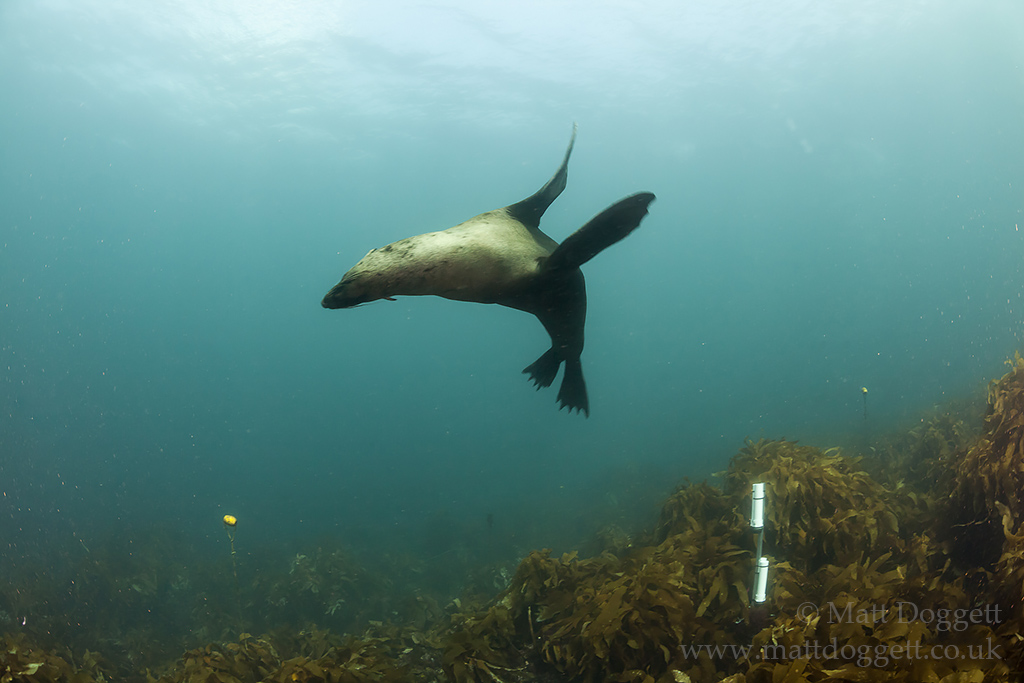 So what is the future for these marine habitats and the species they support facing so many pressures? It is certainly uncertain… But if the scientists and fishing communities can work together to rebuild the decimated lobster population there might perhaps be some natural resilience in the face impending change.